Steer the Buying Process and Players to Outmaneuver the Competition

Salespeople are told they should “call high, wide, and deep”—and really focus on the C-suite. But is that always the best approach?

As with so many questions about what it takes to win a deal, it depends.

A study by Google/Millward Brown Media and Digital found that while the C-suite has final sign-off in 64% of buying decisions, a full 81% of influencers are not in the C-suite.1 So while calling high, wide, and deep has its advantages, salespeople need to do so strategically with a focus on what—and who—can help them win.

Wilson Learning has studied thousands of win-loss reviews and talked to hundreds of salespeople and their managers. We found that, in many cases, the salesperson didn’t fully understand:

It’s not just salespeople who find the buying process complex. Gartner Group research revealed that a full 77% of B2B buyers said that their latest buying decision was “very complex or difficult.”2

Multiple departments and people are involved, and while one person can say “yes,” lots of people can say “no.” Big investments have especially long decision processes with multiple stakeholders and hurdles.

And just when the salesperson thinks a sale has been made, procurement hurdles.

What’s a sales leader to do?

Make sure your salespeople can shape buying decisions by:

DemandGen’s 2020 B2B Buyers Survey revealed that 68% of customers found that the length of their buying process had increased “significantly” or “somewhat” over the previous year, and 44% have formal buying committees.3

Decision processes vary from one company to the next. That means salespeople must form a complete picture to stay competitive, discovering the what, why, and who of the decision process and bringing value to the process itself. Given the increasing influence of internet content and social media in the buying process, salespeople must show value by understanding the decision process and helping customers navigate it—especially for complex solutions and big investments.

Salespeople need to determine who is currently involved in the decision process and, based on their experience, recommend who should be involved. Stakeholders typically include those funding the purchase and an executive or director who makes the final buying decision. They include those with an interest in the purchase—like those who will bring the solution on board and support its ongoing use. And—of course!—end users in various lines of business usually have opinions.

Questions that help determine the buying process and stakeholders include:

“”Salespeople need to determine who is currently involved in the decision process and, based on their experience, recommend who should be involved. 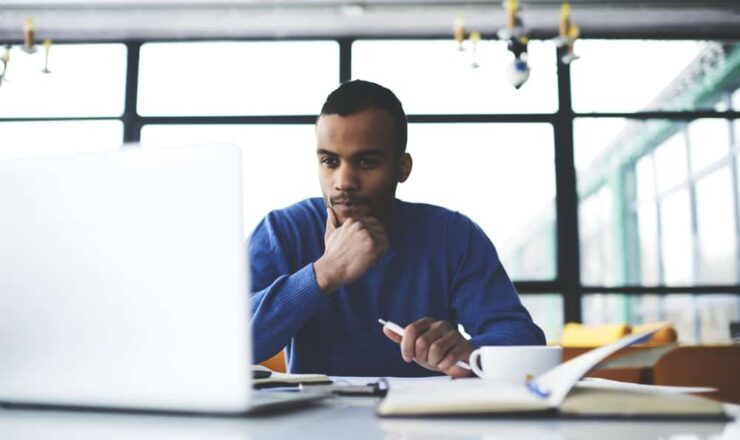 Different stakeholders often have widely divergent views of what a solution should do and the criteria for success.

While companies give all competing vendors a list of “official” criteria, smart salespeople dig deeper to identify each stakeholder’s specific issues and concerns. For example, people in IT focus on technological performance and installation, finance leaders are concerned about ROI, and end users want ease of use with minimal disruption to work during the transition.

Beyond having different opinions about buying criteria, stakeholders have various levels of interest and influence in the decision. Strategically steering the decision process to a win requires salespeople to answer three critical questions:

Stakeholders may have formal or informal influence on the decision.

Formal influence may seem more obvious—like who has the power of the purse. But salespeople beware! While formal levels of influence may seem obvious—the C-suite has the power!—the reality can be very different. For example, a CIO may be the highest ranking stakeholder on a buying committee, but if she isn’t interested in the buying decision, she won’t exert much influence. Instead, a well-regarded director who views the purchase as critical to his success may have far more influence over the ultimate choice.

That brings us to informal influence, which isn’t about hierarchy or position power. Every organization has those they rely on for information and results. These people tend to be admired and respected, with strong expertise, a great track record, and a broad base of support. Salespeople need to determine who holds this informal influence—and then engage them to build their own base of support.

Perspectives on Me and My Competitors

Salespeople know they have to understand the decision process and stakeholders’ perspectives about buying criteria, but do they always know each stakeholders’ thoughts about them—and their competitors?

High-influence stakeholders who advocate for a competitor can be a serious barrier. Every experienced salesperson has a story about a stakeholder who had a prior relationship with his or her competitor—or even one who had a prior bad experience with the salesperson’s own company. Plus, personal and political alliances can derail an on-target solution and a compelling proposal.

Knowing who is involved, their interests, level of influence, and disposition toward competing vendors helps salespeople craft influence strategies that lead to a win. 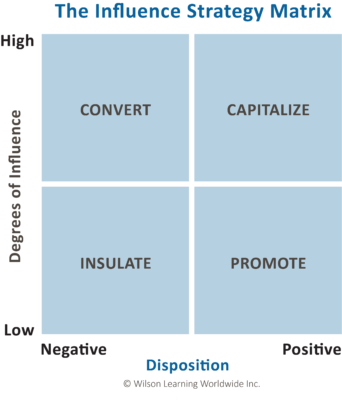 The Influence Strategy Matrix helps salespeople leverage their knowledge of the decision process and players to execute a plan to “influence the influencers.”

The influence strategy for each stakeholder depends on their level of influence and disposition toward the salesperson and his or her company—whether they view them positively or have reservations.

Salespeople should strategically leverage those who are positively disposed toward
them, their company, and their solution.

Salespeople should Capitalize on the influence of stakeholders with high influence as well as those who prefer the salesperson and their company. When a stakeholder is positively disposed toward them but less influential, the salesperson can Promote their level of influence by inviting them to meetings and asking them to share their expertise and opinions in front of others.

In the best of all worlds, every stakeholder would prefer the salesperson’s company and proposal but, given the complex nature of B2B sales, that rarely happens. Salespeople need to have influence strategies for those who:

A successful influence strategy depends on knowing who is involved, what issues each cares about, their level of influence, and their perspectives about the salesperson’s company and their competitors. Armed with this information, a salesperson is ready to deploy the influence strategies needed to win.